Ribbon Cutting Marks the Opening of the GHS Tennis Courts

The Borough of Glassboro and Glassboro School District celebrated the opening of Glassboro High School tennis courts with a ribbon cutting ceremony on August 12.

Mayor John Wallace said, “On behalf of the Borough of Glassboro, I would like to open up these tennis courts to the residents and students of Glassboro and surrounding areas … I especially want to thank all those who worked tirelessly to get this project completed.”

The courts are now open for community use seven days a week from early in the morning through 8 p.m.

Dr. Mark Silverstein, school superintendent, noted, “It’s not just a momentous event for taxpayers who will be able to use this court, but it’s really symbolic of how relationships should work between school districts and boroughs. I can’t thank the borough enough.”

The eight courts feature a synthetic, modular design providing high traction and durability. They have a 15-year warranty. The courts were built with funding support from the borough. Glassboro’s Highway and Parks and Rec departments completed the installation. Glassboro School District Grounds and Maintenance staff and additional school district staff painted posts for the facility’s new fences and prepared the tennis net posts.

“I’m really thrilled that I’ll be able to drive by in the morning and see Glassboro residents being able to play tennis,” said Silverstein. 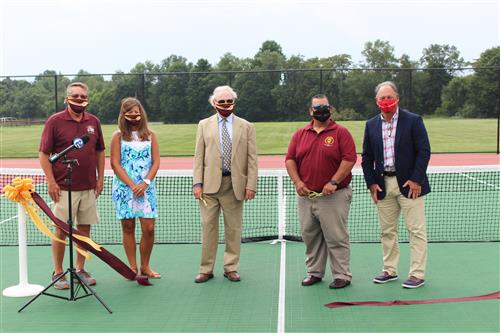